Venues of the Future (VOTF) is a creative Research and Development project exploring the digital future of cultural organisations. The impact of covid-19 has significantly reshaped the way arts and cultural organisations engage with digital and has reinforced that they are more than just their physical buildings. There is now a huge opportunity to expand these institutions into greater digital spaces. This project will examine what a new ‘hybrid’ model might look like - a venue that embraces the potential of both the physical and the digital space.

As part of this, we’ve been having conversations with folks across the cultural sector to gather initial thoughts, ideas and reactions to the project. Like most projects of this nature we’ll be learning as we go, so we want to bring you on our journey from the very beginning and share the insights we’re getting real time. That way we’ll all have a better chance of knowing what a Venue of the Future could look like.

This is one in a series of posts we’ll be sharing to showcase these conversations. 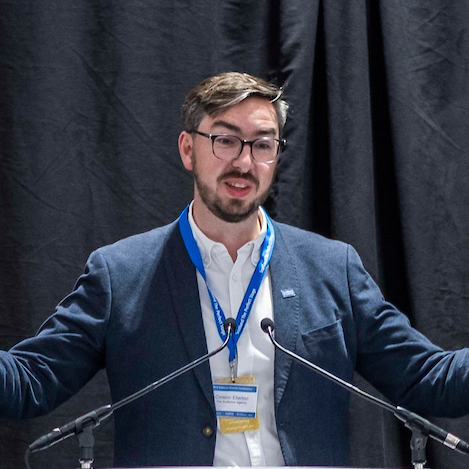 Cimeon Ellerton-Kay is a founder and executive director at Social Convention, a digital production studio and strategy consultancy, and a Resident Entrepreneur at Creative Informatics. Before founding Social Convention Cimeon was at The Audience Agency where he worked on projects like the international platform “Audience Finder”, probably the largest source of aggregated audience data and insight in the world.

A few key themes emerged in this insightful conversation with Cimeon, focused around risk appetite and innovation management, the meaning of creativity in a digital context, the benefits of a modular approach to developing creative work, and the shrinking importance of geography to successful audience reach.

Innovating is inherently risky, so we need to control and manage that risk. For understandable reasons associated with money and resource, the cultural sector is fairly risk averse (particularly in the current climate). This manifests in a risk management approach that focuses on ‘value for money’ and ‘keeping afloat’ – meaning a focus on cash control, and linear plans that seek to predict the end point (for creative work) and every step it will take to get there.

This might look good on paper, but it is “a list of assumptions that everything will go ABCDEFG - linear and following a pre-set path” Cimeon says, “it focuses on the things that can be known or guaranteed in advance”. This approach by default means that the opportunity for the sector to reach its creative potential is limited.

Innovation management embraces the idea of flexibility, change and iteration in order to reach the same ‘end point’, Cimeon says, “in practice this means following a process of applying or acting on an idea, getting feedback, and generating resources. Step two is to get more feedback and generate more resources from the results. And so on. Never going too far ahead without testing in the real world. That's what iteration really is.”

It’s an approach used by other sectors (e.g. Agile in the software world) and Cimeon is optimistic that this can be adapted in the arts and culture sector, suggesting that “it actually fits much better with what happens in the rehearsal room”. This can help to ensure that all of the brilliant creative thinking and activity that happens en route to the ‘end point’ doesn’t get lost in transit.

Related to this is that digital and technology can (and have) drastically changed the lifespan of creative work. In the arts and culture sector, this work has traditionally been seen as the ‘show’ - the main piece from which creative success is judged. But now Cimeon says “we are starting to look at creativity not as the show; but instead the network of creative relationships that we have and how we made them…the creative pipeline”. This is particularly important in the world of digital, where the focus is on relationships not transactions.

So a venue of the future will ask the question, ‘how do you make work or creativity modular in some way’? Not just looking at the main event but bringing to life everything that comes before and afterwards, as equally important constituent parts of the creative piece. “Rather than only focusing on the show in the middle you look at the whole of the activity together”, Cimeon says.

By doing this, organisations can reach their audiences at different touchpoints along their journey, creating a new and exciting experience that doesn’t rely solely on the success of a big show that’s produced behind closed doors. These could be micro experiences or small scale pieces of creative content that don’t require a huge budget. “They can be light touch, as long as they are meaningful and engaging”, Cimeon says. In this digital world there are so many different channels and media opportunities that can be used throughout the creative process.

Cimeon believes that this approach will change the length of time and intensity with which audiences are engaging with a project. Digital allows for pre and post ‘show’ interactions and experiences that mean engagement will slowly decrease over time, rather than falling off a cliff.

“Focusing purely on the show, with a total silence and darkness around it. and believing that everything should be in service to it without being part of the conversation just doesn't work digitally. That's not what the digital world looks like. And it is structured differently to a lonely 90 minutes of undivided attention”.

Underpinning all of this, Cimeon argues, is a need to move away from the internal departmental silos that cultural organisations typically operate in. Instead, recognising and valuing the input and expertise of every team and individual. For the creative team to successfully facilitate innovation and everything that comes with it, they need the support of the rest of the organisation. Because everything leading up to the ‘show’ and everything that comes afterwards is taken care of by other people (e.g. sales, development, finance and marketing departments).

By bringing these people in from the beginning, the risks can be controlled without stifling creativity. Cross-departmental resources can be considered, then aligned with an organisation’s strategic planning and overall budgets.

Cimeon says that an interesting research question for a venue of the future is “what is the role of a marketing person or development person, or a finance person in the creative process? How are they supported to contribute?”

Because supporting them to contribute provides much more space for innovation, learning and development.

The venues of the future project was borne from the idea that cultural organisations are more than just their physical buildings. Cimeon agrees that digital has enabled cultural experiences to transcend physical boundaries, to reach new and diverse audiences that are not restricted to the physical space.

This is highlighted when he suggests that building based institutions are facing the same problem that touring companies have forever - which is “where are they?” “Because when you look at digital, you're no longer about your geography. In a digitally connected world you are no longer the only and best orchestra in town, you are competing with other orchestras across the world - with much bigger orchestras and smaller ones”.

Digital culture is global by nature, so having a network of long-lasting and meaningful connections with each other and with our audiences is key to success. It’s interesting to imagine what role digital can play in forming a new kind of venue that encourages cultural organisations to reconsider their geographical market.

And all of this means we need to think about programming in a completely different way.

You can read all about our other conversations with Ruth McCullough and Catherine Waddington (Abandom Normal Devices) and David Collins (Opera North).

And if you'd like to hear more about our VOTF project, have any questions or just fancy a chat, please do drop us a line and we'll be in touch: team@substrakt.com